Punch Magazine and the origin of cartoons

The first issue of the famous satirical magazine Punch was published today in 1841. It was subtitled The London Charivari in homage to Charles Philipon’s French satirical magazine Le Charivari. Punch is why we call cartoons, well, cartoons. In 1843, the Houses of Parliament were to be decorated with murals, and preparatory sketches, or "cartoons", were displayed for the public. This coincided with a period of great poverty in London, cholera outbreaks, and grumbles over payments given to the Duke of Cumberland. They might have been starving, but they had this groovy art exhibition to attend. After John Leech's Substance and Shadow sketch, humourous drawings would forever be cartoons. 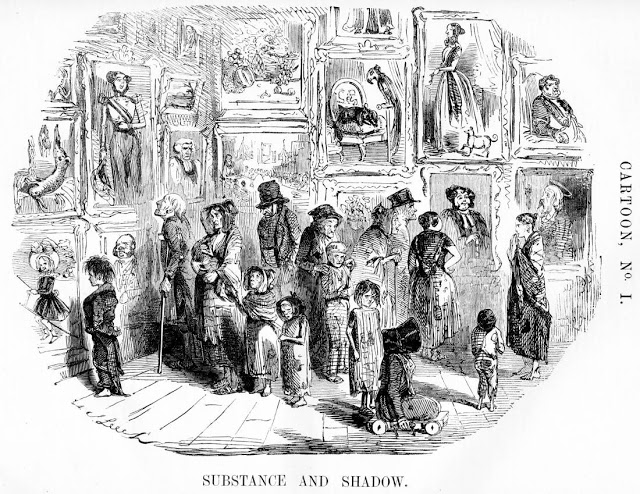 Some say Punch hit the peak of its popularity was in the 19th century but it came to an end on April 8th, 1992 after 151 years of publication. Towards the end, there were jokes about it not being as funny as it used to be (Viz have pinched that line lately) and being the magazine that piled up in dentist waiting rooms.

About four years later, it was revived by Mohammed El Fayed, who owned Harrods. This new version lasted until 2002.

The original Punch office in Fleet Street is now a pawnbrokers but is a short walk from the Punch Tavern, which does/did some decent nosh and a good pint. It started life as a Gin Palace frequented by the 19th century satirists, hence the name. Also near-by, The Old Bell Tavern which was built by Sir Christopher Wren.